The one and only boxing legend Manny Pacquiao. Nicknamed “PacMan”, he is regarded as one of the greatest professional boxers of all time. Pacquiao is the only eight-division world champion in the history of boxing and has won a staggering twelve major world titles. Manny Pacquiao is officially working with BCRC and Boss Planet to create some truly incredible contents.

Baron Davis is a two-time NBA All-Star turned serial entrepreneur, investor, producer, actor, content creator and a culture catalyst. After his stellar career, Baron Davis went on to create his companies, SLiC (Sports Lifestyle in Culture) and More Than Us with the mission to incubate NFT collectives that empower creators to bring marginalized communities into the Web3 space.

Eric “Bobo” Correa is a professional percussionist who began drumming at the age of 4, he made his first public appearance at the age of 5. Early in his career, he joined the Beastie Boys and went on to record and perform with the group around the world.

Happy to be a part of the @BossCatRC family!! Thanks for the love!!! Let's Go!!

Hook n Sling is an Australian record producer, songwriter and DJ currently residing in Los Angeles. In 2007, he received an ARIA Music Awards nomination, a DMC Buzz Chart #1 and several Pete Tong plays for his breakout tune “The Bump”, and later achieved both club and of sound have had Hook ilations including the prestigious Ministry of Sound Annual in 2010. Hook n Sling has played at venues and festivals across the world including Pacha, Space Ibiza, Global Gathering, Future Music Festival and Stereosonic. His most popular work is “Love on Me” in which he produced the song for the famed Swedish electronic music duo Galantis. The song has been played 250 million times on Spotify. Today, Hook n Sling’s Spotify attracts 2 million monthly listeners.

Ross Golan is a multi-award-winning, multi-platinum selling, American songwriter, record producer. In 2016, Golan co-authored an initiative to include songwriters in the Grammy Awards “Album of the Year” category, and 2017 marked the first year a songwriter received a statue for the award. In 2018, he was a leading voice in the Music Modernization Act. In 2019, he became the first songwriter to sit on the board of directors of the National Music Publishers Association in the 100-plus year history of that organization. Golan is also the podcast host of And the Writer Is… which is co-produced by Joe London. It has garnered three million downloads. Ross Golan has worked with some big artists from Maroon 5, Selena Gomez to Ariana Grande.

Jonathan Sadowski is an actor and producer, he is best known for the starring role as Josh Xander Kaminski on the Freedom sitcom Young & Hungry (2014-18). Currently, he is playing the role of Devon in popular Netflix Show Sex/Life.

The song writing duo Mike & Keys (formerly known as Futuristiks) consisted of Money Mike and J-Keys has produced hits after hits over the years. The duo’s first full production credit came in 2009 on Before I Self Destruct for rapper 50 Cent. After further work in 2010, the duo became a prominent production team for hip-hop, R&B an Gospel artists. They were also nominated for their first Recording Academy Grammy Award in the Best Rap Album category for their contribution on Lupe Fiasco’s Food & Liquor II: The Great American Rap Album, Pt. 1. Lupe’s II topped Billboard’s Top R&B/Hip-Hop Albums and Rap Albums charts, while debuting and peaking at No. 5 on the Billboard 200. Since then, Mike & Keys have worked with Eminem, T.I., Fat Joe, Master P and Nipsy Hussle.

B-Real is one of the two lead rappers in the legendary hip-hop group Cypress Hill, along with Sen Dog. He has sold tens of millions of records with Cypress Hill and was a guest artist on the Snoop Dogg single “Vato”, from Snoop Dogg’s 2006 album Tha Blue Carpet Treatment and they both just recently work together on Snoop’s music NFT. Beside B-Real’s successful music career, he is also considered a prominent figure at the forefront of cannabis legalization for over two decades. A true pioneer and legend. 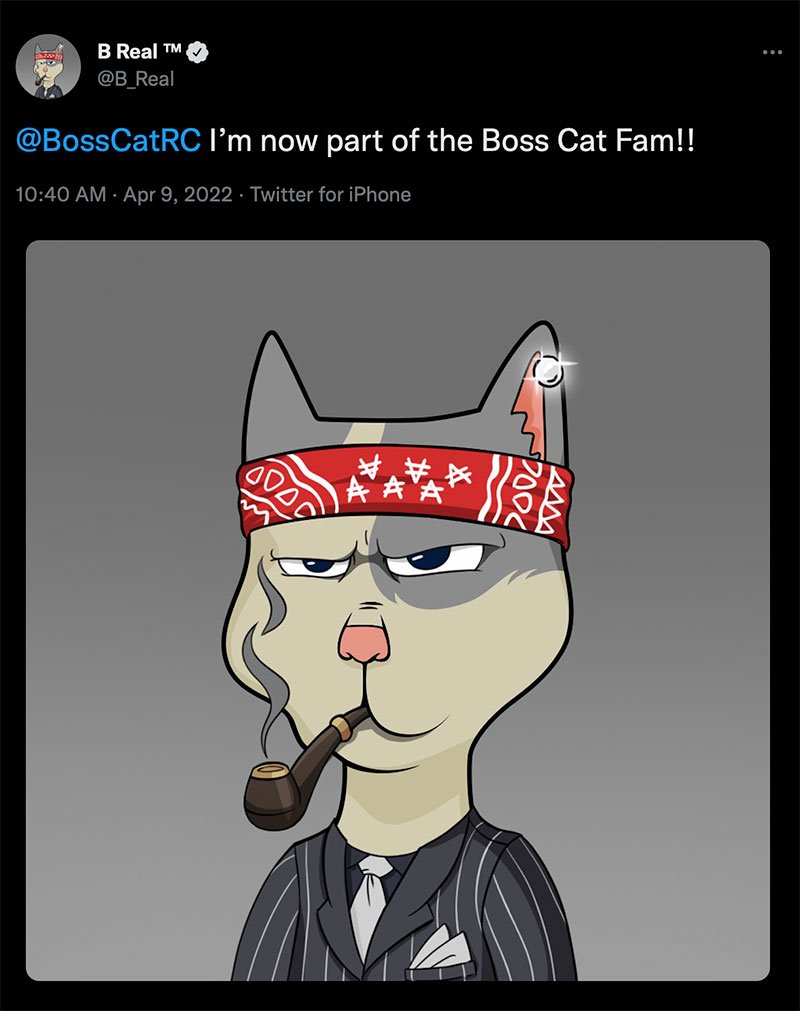 Arkatech Beatz are a renowned music production team from NY, and now based in Atlanta. They were affiliated with Loud Records/Sony Music Entertainment as A&R executives and have composed, written, and produced music for gold and multi-platinum selling artists such as Big Pun, Nas, Raekwon, Prodigy of Mobb Deep, Mýa, Waka Flocka Flame, Jadakiss of The Lox, to name just a few!

Guess what ????
Look what I got!! @BossCatRC #NFTCommunity #NFTArt #BCRC #NFTartist pic.twitter.com/vBoW6K2dEi

Styles P is an American rapper, best known as a member of legendary hip hop group the Lox, alongside childhood friends Sheek Louch and Jadakiss. He is a founder of D-Block Records and was also a part of the Ruff Ryders Entertainment collective. In addition, he has released multiple albums and mixtapes as a solo MC. In 2002, he released his debut solo album A Gangster and a Gentleman, which contained the hit single “Good Times”. The song peaked at number 22 on the US Billboard Hot 100 chart and received massive nationwide airplay in 2002. He has gone on to release Time Is Money (2006), Super Gangster (Extraordinary Gentleman) (2007), Master of Ceremonies (2011), The World’s Most Hardest MC Project (2012), Float (2013), Phantom and the Ghost (2014), A Wise Guy and a Wise Guy (2015), and G-Host (2018). Today, Styles P is heavily involved in the NFT scene and has made his presence known in the web3 space.

Terrance “T. Wrecks” McKinney is an American professional MMA fighter who currently competes in the lightweight division of the UFC. A professional since 2017, McKinney also competed for Legacy Fighting Alliance (LFA). Terrance McKinney knocked out Matt Frevola in seven seconds during the UFC 263. McKinney now holds the record for the fastest knockout in UFC lightweight history!

Just joined the Boss Cat Rocket Club! Where my cats at? @BossCatRC

Renowned blogger and rapper ItsBizKit just joined the BCRC family! ItsBizKit is known as the “Biggest Blogger In The World.” Aside from blogging, he was also a host on Revolt TV called “Wow Dats Crzy.” Today, ItsBizKit has also transitioned from blogging to rapping. He has singles with famed rappers such as Jadakiss, Uncle Murda and Dreamdoll.

Zebby is a Filipino super model and influencer with 5 million Twitter followers and 12 million YouTube subscribers with an astonishing 846 million views! 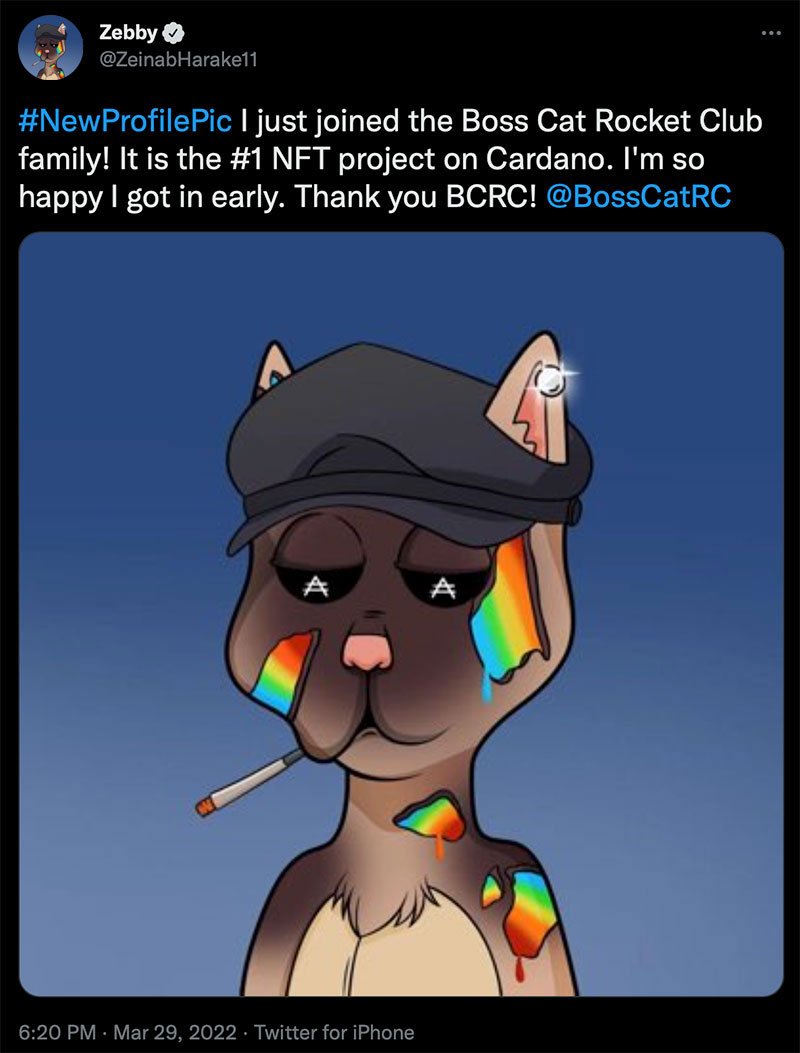 911 debut their first album in 2012 and quickly rose to fame with the group’s flamboyant style and catchy music that captured the young Taiwanese audience. In 2016, Ken G along with 911 was nominated for the Best Pop Group of the 27th Golden Melody Award (Biggest music award in Taiwan). In the same year, the hit song “Hip-Hop Love” won the YouTube award “No. 1 in the Music Video List” and ranked in the top 20 Chinese views, with 911 occupying three seats, with a total of more than 460 million views. Ken G not only produces hits after hits, he’s also had lead roles in many films.

Sunny Wang debuted as a model and officially joined the show business with his debut drama In Time with You. Before he started his career as an actor, one of his previous notable work as a model was for a charity photo shoot known as “Important Person” for a Taiwanese magazine. In 2012, Wang starred in Once Upon a Love which also stars actress Cheryl Yang. Since then, Wang has appeared in numerous Box Office hit as lead actors. Sunny Wang is dubbed “the sexiest man in Taiwan.”

Meowww… I did a Boss Cat thing… @BossCatRC I heard @BlueMagicBCRC is quite the cat person too! #CNFT #BossCatRocketClub #BCRC #NFTCommunity pic.twitter.com/yrwQPl4zup

Candy Ken is an Australian rapper, model and TikToker. He has become famous for his TikTok videos. Today, he has gained a massive following on TikTok with 16.1 million followers, which is more than the population of many countries combined! 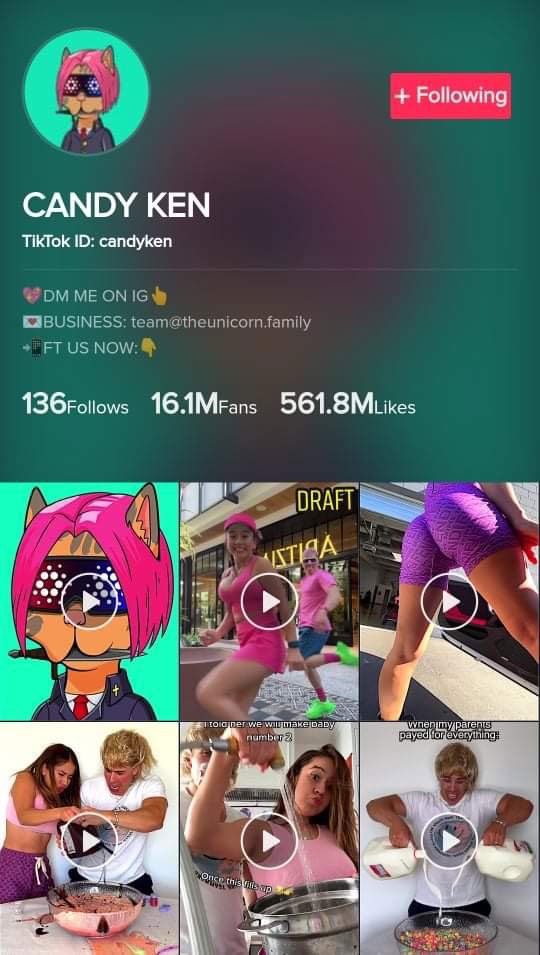